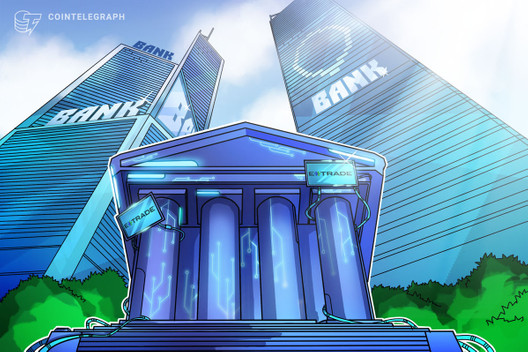 The $13 billion deal marks Morgan Stanley’s largest takeover since the crisis of 2008, also bringing along E*Trade’s five million clients, $360 billion in assets and an online bank, the Wall Street Journal reported on Feb. 20.

With the acquisition of E*Trade, Morgan Stanley will receive over 4,000 corporate customers and $580 billion of stock held on behalf of their employees. At the same time, E*Trade’s CEO, Michael Pizzi will retain its position, and the company will keep its brand, retail storefronts and ad campaigns.

The parties’ involvement with the crypto world

In April, E*Trade announced its plan to begin offering digital currency trading on its platform. At the time, the company was preparing to offer Bitcoin (BTC) and Ether (ETH) after which it would add other cryptocurrencies.

As for Morgan Stanley, the company was ready to launch swaps tracking Bitcoin futures since early fall in 2018 but did not receive a single contract by the end of that year. Nonetheless, the firm is ready to launch crypto services as soon as there is sign of demand, sources familiar with the matter revealed at the time.

As such, the Wall Street giant postponed its plans to enter the crypto industry more actively as the value of cryptocurrencies fell at the end of 2018.