Bitcoin price should be heading towards $20,000, an all-time high, according to many leading analysts, but certain macro factors could halt its dreamy bull run ahead.

This year, the BTC/USD exchange rate has surged to a yearly top above $12,000. The pair’s uptrend has appeared on increasing bids for safe-haven assets as the COVID pandemic shows no signs of subsiding. Analysts point to trillions of dollars worth of stimulus aid needed to aid the US economy through the epidemic. They fear it would leave behind higher inflation.

“The Federal Reserve’s attempts to control inflation are likely to end in a disaster, which will benefit BTC,” said Anthony Pompliano, co-founder of Morgan Creek Digital. “We agree. Once the FED loses control over inflation, there’s no going back.”

Atop that, the US central bank is printing money at near-zero interest rates. A loosening monetary policy such as this further makes Bitcoin more attractive to hold. Part of the reason is reduced opportunity costs offered by the US Treasuries. As yields go down, safe-haven assets go up. 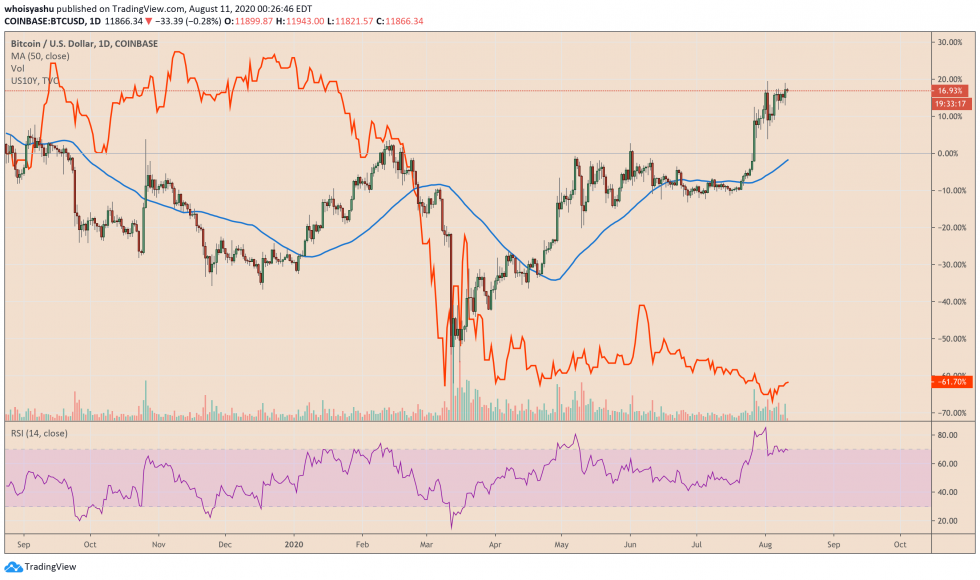 Bitcoin and US 10-year Yield performance since March 2020. Source: TradingView.com

While there are a plethora of factors that support Bitcoin for its $20,000-price target, there are also two significant events that could change the cryptocurrency’s direction in the sessions ahead.

One of the main reasons why the Bitcoin price rally may halt ahead of hitting $20,000 is a COVID vaccine.

A successful way to tackle the pandemic would reduce the Fed’s and the US Congress’s need to remain dovish. Markets will reopen as usual, which would translate into a job recovery. A vaccine appears pretty close as many of the world’s leading pharmaceutical companies race against each other to launch one.

Yung Yu-Ma, the chief investment strategist at BMO Wealth Management, said in the context of gold, another safe-haven asset that last week hit its all-time high, that the precious metal could go down on a successful vaccine launch.

“If an accelerated vaccine timeline comes to fruition the dark cloud over the global economy would begin to lift and the demand for gold’s ‘safe-haven’ quality would likely weaken,” he said.

Bitcoin, which has formed a record positive correlation with gold, would come under similar downside risks. People’s need to hold the cryptocurrency would diminish as the Fed increases its interest rates.

Meanwhile, Bitcoin expects to trade cautiously ahead of the US presidential election in November.

The Democratic nominee Joe Biden has pledged to undo many of the Donald Trump’s currency policies. Observers believe that it would reduce stress in the markets, which, in turn, reduces the demand for safe-haven assets.

“It could be a speech that Biden makes it could be some conciliatory action on the administration front on international trade,” said Guy Benstead, portfolio manager at Shelton Capital.

The next months would serve as a stress test for Bitcoin. While the cryptocurrency’s hardcore believers see its price hitting above $20,000 by 2021-top, a renewed trust in the US economy is still a risk that bulls can’t ignore.