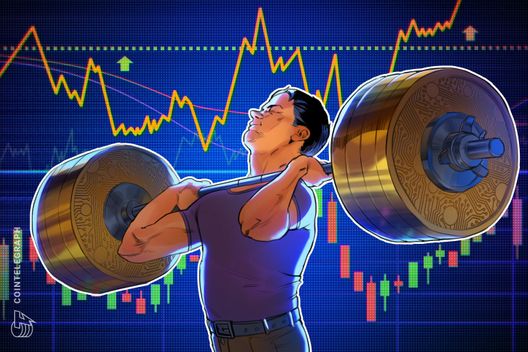 The market shows signs of a tentative recovery, but momentum has not yet rallied sufficiently to suggest an outright reversal of the bear market.

August 19: The crypto market picture shows signs of recovery following last week’s major market crash, but momentum has not yet rallied sufficiently to indicate a categorical reversal of the bear market.

August 17 saw the first major attempt to reverse fortunes, but these gains have not been widely consolidated. At press time, Bitcoin (BTC) is trading below the $6,500 price point and Ethereum (ETH) has dipped below $300.

Most major of crypto assets are seeing modest to solid gains of 1 to 5 percent on the day, as Coin360 data shows, with some top 20 coins up as much as 16 percent.

Bitcoin (BTC) is currently seeing almost no change over the past 24 hours at press time, trading at around $6,380, according to Cointelegraph’s Bitcoin price index. Yesterday’s bullish but short-lived spike upwards towards the $6,500 mark has failed to hold, and the coin has today seen a slide to as low as $6,330. While it has since stemmed its losses, Bitcoin has failed to break back above $6,500, seeing a jagged recovery to trade within the $6,400 range.

On the week, Bitcoin is now up just half a percent, but its monthly losses remain at a stark 14.56  percent. 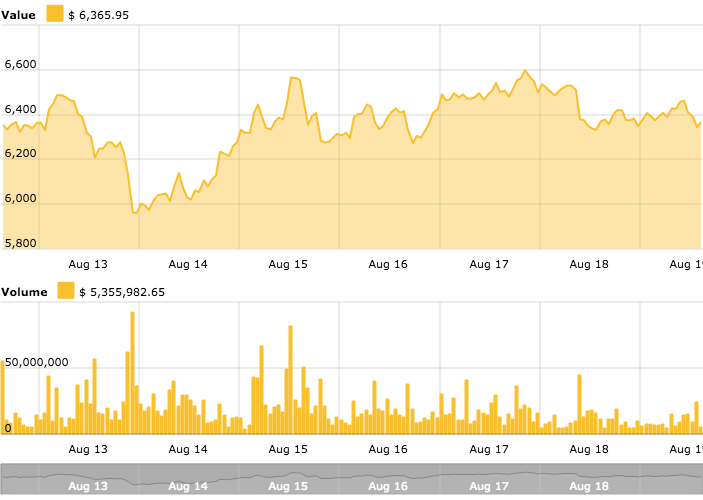 Ethereum (ETH) is trading just under $300 at press time at $395, up around 1.85 percent on the day. The top altcoin has staked a tentative and gradual ascent back up towards $300 over the past 24-hours, trading at $285 at the start of the period. Nonetheless, yesterday’s strong momentum to break above $310 has not been re-attempted today.

Ethereum’s losses on its weekly chart are at around 8 percent; on the month, the asset has plummeted by 37 percent.

Since crashing below $300 August 13, Ethereum notably continues to trade at a price point not seen since early November 2017. 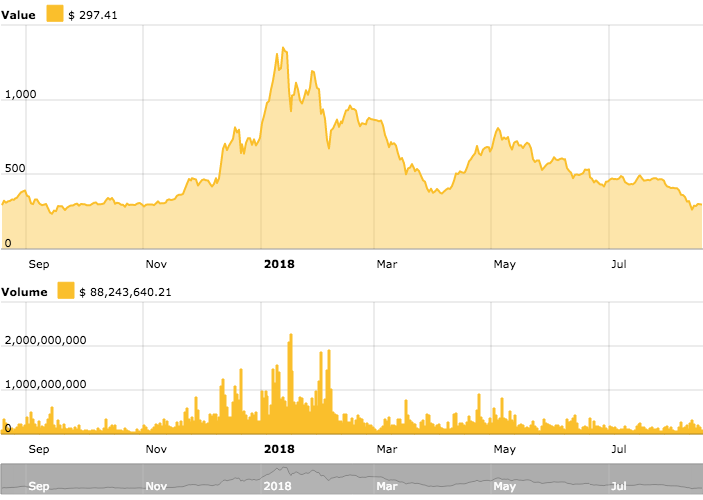 Almost all of the other top ten coins on CoinMarketCap’s listings are in the green, with the exception of Stellar (XLM), and anonymity-oriented altcoin Monero (XMR), both down less than one percent.

In the context of the top twenty coins, IOTA (MIOTA), ranked 11th, has seen a bullish 11.6 percent growth on the day to trade at $0.53 at press time. Despite tumbling during the last week’s market-wide crash, the altcoin has now almost closed its losses on its weekly chart. 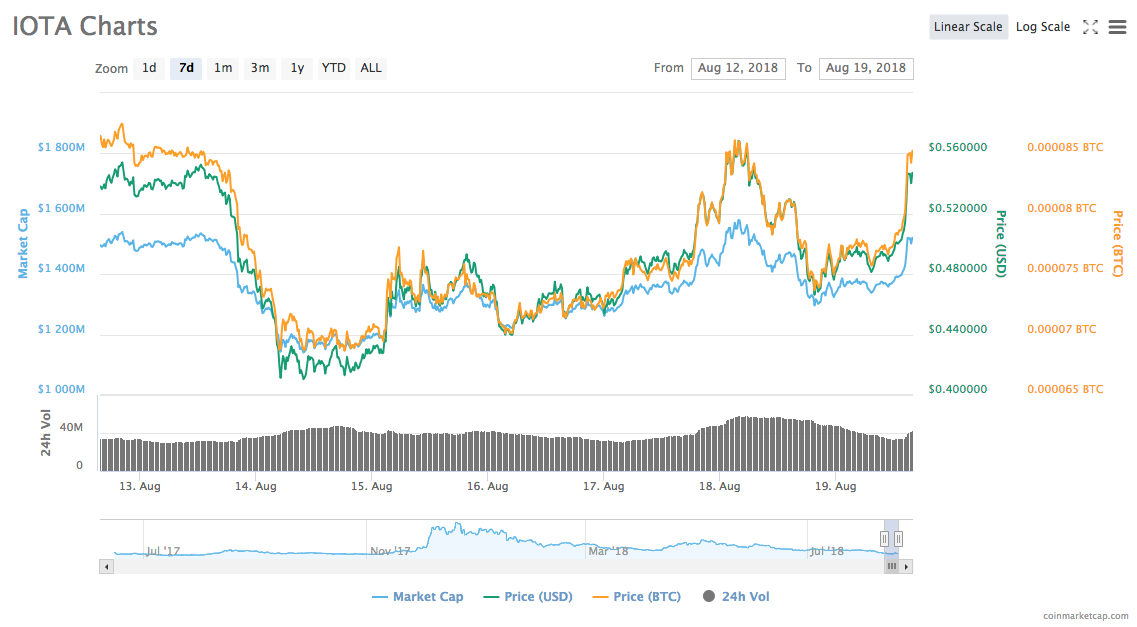 Tezos (XTZ), ranked 18th, has secured strong almost 4 percent growth on the day to trade at $1.37 at press time. Tezos’ weekly chart shows a strong week of gradual gains –– in contrast to the parabolic volatility that has characterized the attempted recoveries of other cryptos in the wake of last week’s market crash. 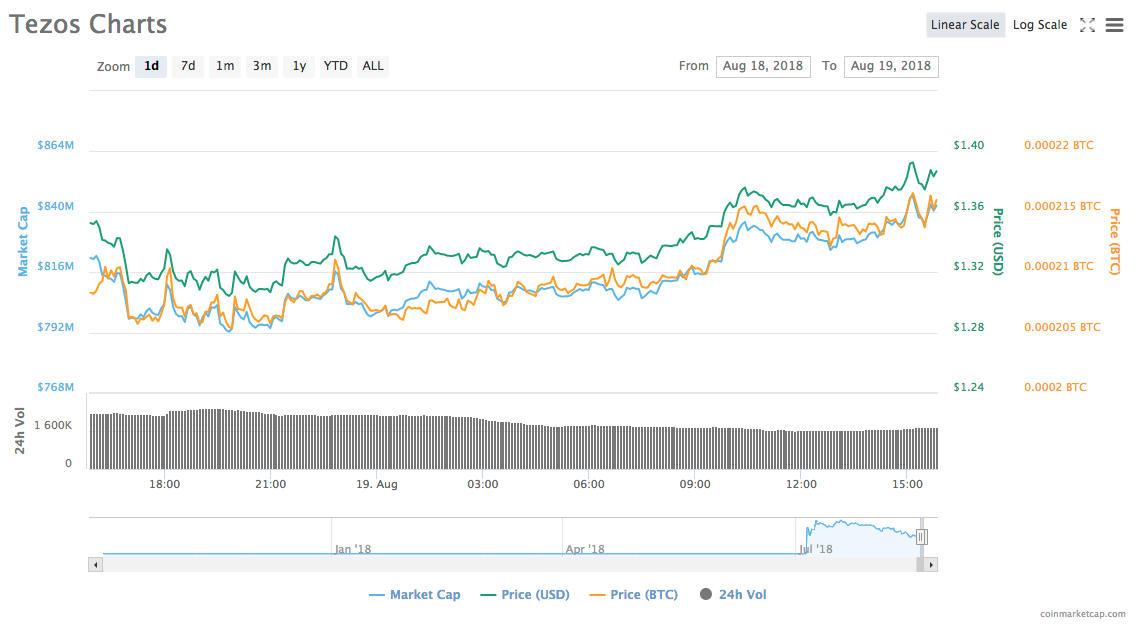 Bitcoin (BTC) dominance –– or Bitcoin’s share of total crypto market capitalization  –– is slightly down on the week, now at 51.6 percent. BTC dominance has been on the rise as of mid-May. On August 14, its soared as high as 54.6 percent –– reflecting Bitcoin’s relative resilience as compared with the staggering price plummet of Ethereum and other altcoins. 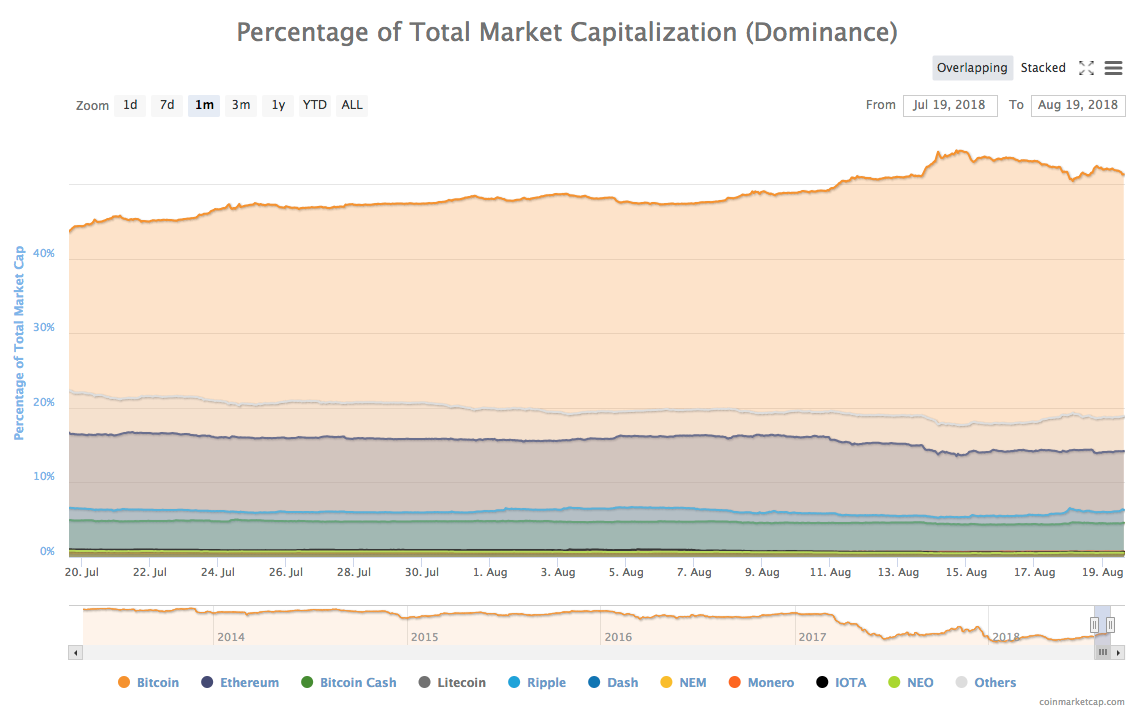 Total market capitalization of all cryptocurrencies is around $213.4 billion at press time, up from its tumble to under $189 billion August 13.

While the market remains shaky since crashing last week, new research from Bernstein analysts has this week suggested that revenue generated by cryptocurrency exchanges through transaction fees alone could more than double to hit $4 billion in 2018.