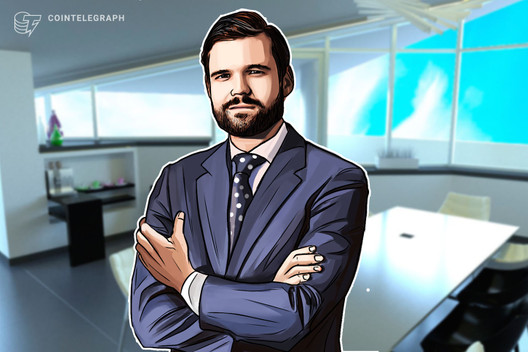 Alex Tapscott and NextBlock Global have been ordered to cease and desist from committing further violations of the Securities Act.

Blockchain entrepreneur Alex Tapscott has been fined $25,000 by the United States Securities and Exchange Commission (SEC,) according to a filing on May 14.

Tapscott is the CEO of NextBlock Global, and in the filing, the SEC said neither the Canadian company nor its securities had ever been registered with the commission.

The 33-year-old and his company have also been ordered to cease and desist from committing further violations of the Securities Act.

According to the SEC, NextBlock was founded by Tapscott and three others in June 2017 for the purpose of investing in blockchain companies and related digital assets.

During an offering that raised $16 million, the entrepreneur and his company made false representations that four prominent blockchain professionals were serving as advisors. The SEC document adds:

“These misrepresentations were part of the selling point of NextBlock’s fundraising effort: that NextBlock and Tapscott had access to, and unparalleled relationships with, opinion-makers, the best entrepreneurs, and the highest profile figures in the blockchain community. NextBlock and Tapscott knew or should have known that the statements to investors regarding these advisors were inaccurate.”

The SEC said this conduct amounted to a violation of the Securities Act.

Earlier this week, Tapscott was fined $148,000 by the Ontario Securities Commission, and he agreed to lead ethics seminars at Canadian business schools as part of the settlement. NextBlock itself has paid a $520,000 penalty.

These previous fines were taken into account when the SEC made its ruling.

The furor involving NextBlock emerged in 2017 when Forbes reached out to the four high-profile individuals listed as advisors — including Ethereum founder Vitalik Buterin. All of them denied having any involvement, prompting the company to return funds to investors.